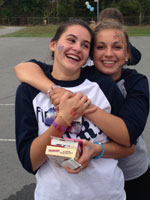 When I got diagnosed with diabetes I was eight years old. I had symptoms for a couple of months before my mom finally took me to the doctor. There were a few events that led up to my mom taking me. First I was eating more than the normal eight-year-old, more than my dad, and losing weight. I lost about 20 pounds and looked almost anorexic. I was pale as a ghost and felt sick a lot.

My gymnastics coach told me I couldn't practice anymore until they found out what was wrong. A second event that led to my mom finally bringing me to the doctor was when me and my dad went food shopping I always had to go to the bathroom. While at the bathroom I would then get a drink. I like to joke I drank the water fountain dry each time I would get a drink because I drank so much. Then I would find my dad and stay with him for about five more minutes before I had to go to the bathroom again. While there I would get a drink. This happened about five to six times during the hour/hour and a half I was food shopping with my dad. A third event was each night I would wake up about two to three times a night getting a drink and going to the bathroom. My parents did not know this until one night I didn't wake up but instead I wet the bed. They were very concerned about that because I was eight years old. My mom finally took me to the doctor and my blood glucose was 599 mg/dL.

I am 16 now and I have been living with diabetes for eight years. I have become accustom to checking my blood every time before I eat and when I don't feel well. I'd say my worst moment with T1D is last year at camp when my blood went to 24 mg/dL. I'm not exactly sure what happened when I was low because I blanked out, but I do remember when I woke up I realized I had peed myself! One of the best moments of T1D is being able to go to camp each year and make new friends who are all like me and understand what I'm talking about when I say something about diabetes. Yes, diabetes does suck, but since I'm stuck with it, until they find a cure, I can learn to live with it the best way possible.