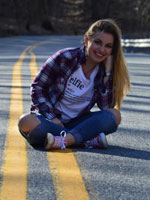 I was 14 upon diagnosis. It was the end of 8th grade, and we were approaching the finals week. I hadn't been feeling like myself, but I wasn't worried about it because I thought of it just being teenage hormones or whatever. I had been having excessive thirst, the constant urge to pee (4-6 times a night); I was always tired and irritable.

On May 13, 2013, I went to the doctor for a normal appointment. Nothing else. At the end, my mom asked the doctor about the thirst issue, and she had me do one of those pee test. Naturally, I wasn't worried; usually nothing happens and everything comes back fine!

That's not exactly what happened though. The doctor said she wanted another one done in the morning. So, the next morning I peed in the cup and went off to school while my mom took the cup into the lab to be tested. In 7th period that day I got a call for an early dismissal that I had no idea about. I left school and my mom took me to the lab. Here I had my first of many blood tests, and I still had no idea why I was getting blood taken. From there we went to eat and I didn't eat because I wasn't at all hungry. Afterwards we went home and I immediately laid down for a nap (I never take naps). Around an hour and a half later my mom woke me up and told me we had to leave at that moment for Children's Hospital in Pittsburgh. Three hours later I was having my blood glucose (BG) tested in the emergency room. The meter read "high." No number. Just the word "high." I later learned that my BG upon arrival was 656! I amazed the team of doctors because I wasn't sick. Most people would have been throwing up or gone into a coma or developed ketones, but I was fine. So, on May 15, 2013, I was diagnosed with Type 1 Diabetes.

After almost a week off, I was back in school where the rumors had already begun. I tried to keep it a secret, but my close friends knew, so gradually my class started to learn why I skipped homeroom before lunch. They all seemed nervous around me—like they would say something wrong or hurt me somehow. Overtime though, they came back. I'm still friends with my "pre-diagnosis" friends, and I've made more since then (they don't care that I have a disease, and that's why I love them). They amazed me though because they all made a legitimate attempt to understand what was wrong with me. Especially my best friend, Sarah. When I told her, she immediately researched it and has learned the ins and outs of diabetes.

Being a teenager is hard enough, but throw in an "invisible" disease; it makes things feel impossible. My social life has returned to normal for the most part. I still go to the mall and parties and friends' houses; the guys still mess with me daily. Now, though, when I go out, I must take a bag with me everywhere carrying my test kit and insulin. I can't just grab a bite of pizza unless it's been two hours since my last injection or if I don't have my insulin. My friends understand this though. They don't mind if we're out eating dinner, and I pull my test kit out, check my BS, and give myself a shot; they're fine with that. I am so thankful for them because I was terrified that everyone would look at me differently, but they don't. My friends seem to understand it more than adults sometimes. People my age don't make the assumptions that adults seem to all the time. We ask questions while adults make the common misconceptions. I'm not trying to stereotype, but it's true. Some misconceptions I hear far too often about Type 1 Diabetes (T1D) are: You just ate too much sugar as a kid; you didn't exercise enough; stay healthy, it'll go away; Type 1 and 2 are practically the same thing; insulin is a cure; or, "oh that means you can't eat sugar."

T1D is unpreventable; there is nothing I could've done to stop this from happening to me. Insulin, it is not a cure; not even close. Insulin is more like life support on a day to day basis. T1D is incurable and life threatening. Without a cure, I and three million other Americans, including me, will have to live with this for the rest of our lives.

Diabetes is an autoimmune disease (because the only thing tough enough to kick my butt is T1D). So my body basically attacks itself. My body sees the beta cells (insulin producing cells) as a threat and kills them off. My pancreas does not produce insulin anymore because it keeps getting killed off. Because of all this, I like to joke and say I'm a zombie because I basically have an almost dead organ inside me that attacks itself. In all seriousness, my pancreas does not produce insulin, a vital growth hormone. I'm short for an 18 year old, but believe it or not I was even shorter. Now that I'm injecting myself with insulin, I've grown past the height of a 4th grader now so I'm happy.

Untreated diabetes can lead to kidney, nerve or eye damage along with the possibility of a coma or even death.

Anyone can be diagnosed with T1D. Children, adults, celebrities, your child or grandchild, your niece or nephew. It can happen to anyone and there is no way to stop it from happening. Diabetes is 24/7/365—day job. Diabetics are true fighters because we can't just turn it off. We fight the invisible. We "don't look sick," but we have a life-threatening disease. We can do anything, but we have this part of us that will never go away and demands to be present in our lives. Yes, it is extremely hard to deal with it, but I'm not going to let this get in my way.

It affects my life all the time, but I deal with it because I want to live. Sometimes though, I get too much insulin or not enough food. When this happens, my blood sugar drops low. Being low is a hard feeling to describe, but to say the least, it absolutely sucks. I'm going to try and describe it the best I can, though. Okay, so imagine you've just finished running a marathon without stopping once. Your legs are shaking so bad that it's hard to stand up. And your heart is beating so fast it feels like it is going to pound right out of your chest. Every muscle in your body has gone numb, and your whole world is spinning around you. That is the best description I can possibly give for you to understand without feeling it yourself. The lower your sugar drops, the worse you feel. To fix this, you eat sugar tabs or drink orange juice or anything you can get your hands on pretty much. The lowest I have ever been is 24.

Sometimes you don't get enough insulin or you eat too much food or had a sweet treat. This is when your numbers go high. It is actually really funny in public because I'll be checking my sugar and my mom will ask "How's your number?" and I might say something like 275 or whatever and my mom will say "Wow you're high" and everyone looks over like *insert facial expression*

The absolute worst thing about having diabetes in my opinion though are the endocrinology appointments. You walk in feeling like you've done a pretty good job and leave feeling like everything you've ever done was wrong. But that isn't why I hate them. Back in January I broke down at an appointment because I felt the doctor didn't understand me. She was trying to tell me to do all these things like going to a counselor because I had "anger issues." In all reality, though, I was just mad that she didn't understand what I was going through. All she did was look at it as a medical issue, not how it affects everything else besides my body. She then told me something that hit me right in the gut, and the reason I'm writing this today. She told me not to hope for a cure anytime soon. She said the likelihood of it happening in my lifetime isn't too good. In my mind, I knew she was probably somewhat right, but I refuse to believe that. I don't care if she was telling me the truth; that is not something you tell anyone especially a hormonal teenager with a disease.

Being a teenager with T1D is hard. It makes you feel so alone. I know at my school there are only seven people with T1D, and only one other my age, a boy. There's no one to go to when you want to talk about the struggles. Sure, you can talk to your friends and family, but they don't know what it's like. All they can do is provide support and say, "it'll get better." My parents always say how they wish they could take it away from me, but realistically they can't! No one can. I speak on behalf of all the other Type 1 diabetics of the world when I say, "One day I want to say, 'I used to have diabetes.'"